Originating from Salford, Manchester, Jay was inspired to want learn the guitar at the age of 9 after hearing the theme tune from ‘Knight Rider’. It wasn’t until the age of 13 that he began what was to become a lifelong love and passion for music making after receiving his first electric guitar. Immediately, Jay fell in love with Rock music after being introduced to the catchy riffs and soaring solos in the song ‘Whole Lotta Rosie’ by AC/DC.

Jay has since relocated to Halifax, and has a wealth of experience as a guitar teacher having successfully operated his small private teaching business since 2012. Further to this, he has also worked closely with a number of schools within the Calderdale area since 2013. Jay is very excited to be able to offer his skills, experience and enthusiasm for pop and rock music to the learners of Calderdale Music!

Academically, Jay holds a Grade 8 Distinction in Electric Guitar, A first class BA(Hons) degree in Popular Music and Recording from the University of Salford, and a PGCE in secondary music education from Manchester Metropolitan University. It was during the intense period of studying for his PGCE that Jay realised his passion for teaching and learning, specifically focussing on pop and rock guitar.

Jay also has wealth of experience of playing in a number of bands and venues around England. Most recently he played lead guitar in the nationally known Megadeth tribute act Megadeth UK, and played venues such as Liverpool O2, Manchester Academy, and the Legends of Rock festival in Great Yarmouth.

What you can expect from Jay as your guitar teacher is enthusiasm, encouragement, excitement and presence as he aims to guide, inspire and support you through your unique and amazing guitar learning journey. He aims to be able to help you find your lifelong love and passion for music, too! 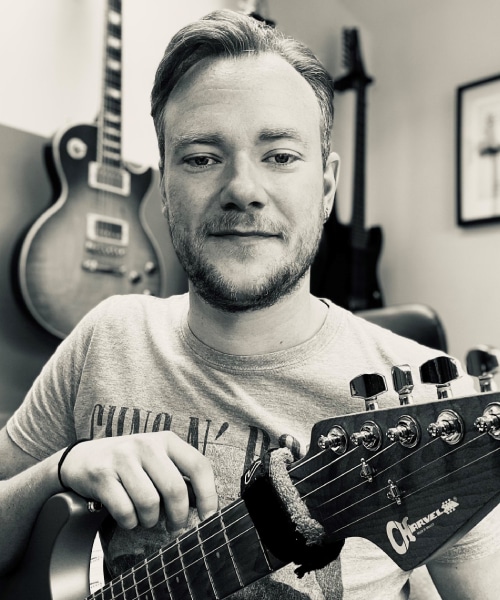